“The siding is all new so the fire must have been recent,” said Rachel Newman-Greene, from West Elmwood Housing Development Corporation guiding our walking tour. I looked where she was pointing in an alley between two houses. The new siding on one house was twisted and drooping like tangled ribbons. The other house had scorch marks up to the roof. “Probably a trash fire,” Rachel continued, “you can see all the mattresses in the back.” Six mattresses were piled in the back of the alley along with other garbage. A bag of sea shells lay near us and as I walked over to get a closer look I stepped on a piece of circuit board already stripped of any valuable metals.

Illegal dumping is common in the West End of Providence. The street we were on, Parade Street between Cranston and Hollis Street, is typical here: houses close together, paved yards, little green space.

As interns at Clean Water Action, our group of five Brown and RISD students is creating a map of the West End which incorporates factors such as heat island effect, impervious surfaces, and flooding issues with the goal of identifying locations where green infrastructure will hold maximum benefit for storm water management. This street highlighted all the issues we are studying. Yet I saw huge potential for this careworn street.

Part of our research is studying how other cities handle storm water; my research focuses on Philadelphia, PA. The day before our tour I happened to watch a video on a project in Philadelphia which occurred on a street parallel to this one: narrow, little greenery and lots of pavement. During rain events, water filled the street and the basements of people’s homes. But it was too narrow for typical GI projects such as bioswales or street plantings. As a result the city installed something unique to mitigate the flooding: porous pavement. 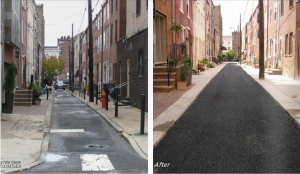 Porous pavement looks like typical asphalt but it allows water to flow through to a drainage basin beneath. This not only filters the water before allowing it to infiltrate into the ground, but also prevents runoff into the combined sewer-storm water system. When it rains the combined system can be overwhelmed and raw sewage overflows into the rivers surrounding Philadelphia. Green infrastructure projects handle water before it enters the system, reducing the occurrence of this revolting event.

Providence also utilizes a combined system which is overwhelmed at an inch of rain in 24 hours. Walking down Parade Street I acknowledged that the sidewalks were too narrow for tree plantings. Instead I saw visions of installing porous pavement to handle the rain water and runoff from houses and paved yards. Bump outs into the road for trees to absorb water and provide a cooling effect. This careworn street could become a model in Providence in how to manage storm water and restore our waterways to healthy conditions. All it takes is some reimagining and a committed city. 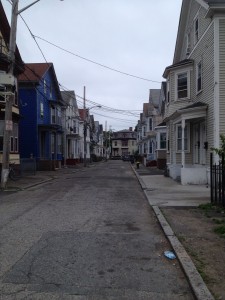 Join our email list to stay in the loop on clean water issues affecting your region.